From Peru to ManitobaEtchiboy is the only fair trade metis product vendor in Manitoba. 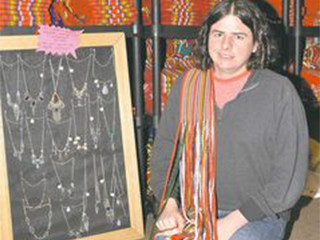 When the La Broquerie Métis, Miguel Vielfaure, travelled to Peru in May of 2006, he never intended to launch into the fair trade market. However, this is exactly what happened when he created Etchiboy in early 2007.

"When I travelled to Peru, I found a marketplace with sashes created with a loom that were very similar to the metis sashes," explains Miguel Vielfaure. "When I returned to Canada, I convinced the Manitoba Métis Federation to order 26 of them.

"In order to make the sashes I then proceeded to contact a friend in Lima who helped me get in touch with El Telar which is an association of single mothers, near Cuzco," he continues. "After having met them via Internet, I decided to launch myself in the fair trade market and create Etchiboy."

El Telar assembles 20 single mothers, widows or abandoned, in the rural communities of Cuzco. They have access to 10 looms in order to make the products for their orders of which 90% are generated by Miguel Vielfaure and 10% are generated by the local market.

El Telar cannot permit itself to hire more than 20 women in regards to the current demand for products and labour. Miguel Vielfaure hopes to increase this number.
"My largest market ranges from British Colombia to Ontario, but I also have clients in the United States as well as in Europe," he indicates. "The métis gift shops and associations account for 60% of my orders."

Etchiboy, which means "Eh, little boy" in Mitchif, is, according to Miguel Vielfaure’s knowledge, "the only fair trade company owned by an aboriginal from the industrial world who works with aboriginals of the third world."
In addition, the company offers a unique compromise between finger woven sashes that can be customized for a cost that is a little pricier since they represent hundreds of hours of work, and wholesale cheap sashes that are made by machine.